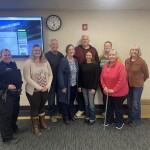 Donnie Heiduck is a Law Enforcement Ranger with Wyoming State Parks.  He serves in the capacity of a LE Ranger at Curt Gowdy State Park, but has the privilege of working at events at the Wyoming State Capitol, the Wyoming Territorial Prison Guernsey State Park, Wyoming State Museum, Historic Governor’s Mansion, Fort Bridger, Quebec Historic Site, and Glendo State Park.  Donnie is a former Detective and Crime Scene Investigator with the Laramie County Sheriff’s Department.  He served with the Sheriff’s Department from 1987 to his retirement in 2016.  Donnie served in the Sheriff’s Department in a number of capacities including community safety training, public awareness and community advocacy programs.    His career in law enforcement started with the Cheyenne Police Department in 1979 and he has served in the same capacity in the Laramie County Community since then, working as Police Patrolman, Dispatcher, Reserve Deputy, Patrol Deputy, Detention Officer, Court Security Officer, and concluding his career as a Detective/Crime Scene Investigator/Community Service Deputy.  Law Enforcement has evolved to incorporate the strategy of community policing, which highlights prevention and education, and the DUI Victim Impact Panel is a positive creditable example of that particular premise.  He has served on the Board since 2008 and initiated the DUI VIP Scholarship at Laramie County Community College.  Donnie is currently serving as the elected Council President since 2016.  I believe that the DUI Victim Impact Panel Speakers and our Board Members have become a “family”, a family created out of tragedy that has brought us all together for the good of our community.

John Pederson is currently the Staff Investigator for the District Attorney’s Office in Laramie County.  John’s Law Enforcement career began in 1990 with the Cheyenne Police Department where he has worked as a Patrol Officer, Traffic Officer, and Detective.  John retired from the Cheyenne Police Department in 2017 with 27 years of service.  John worked in several specialty areas while employed there, including Field Training Officer, Crime Scene Technician, and Accident Reconstructionist.  John joined the Laramie County DUI Victim Impact Panel Council in 2007, and has been serving as the elected Treasurer since 2008.

Pam Allsop has been with the DUI Victim Impact Panel Board since 2019.  Her interest in the Panel began when she was supervisor of Driver Service’s Records Department and saw the amount of DUI’s processed through her department on a daily basis from around Wyoming.  After 16 years in that position, she is now working for the Wyoming Livestock Board.  She continues with the DUI Panel Board as she has witnessed the need for DUI offenders to see and hear the effect of impaired driving on the victims and their families.  Pam believes the talks given by the victims and the survivors are very effective in deterring future DUI’s.